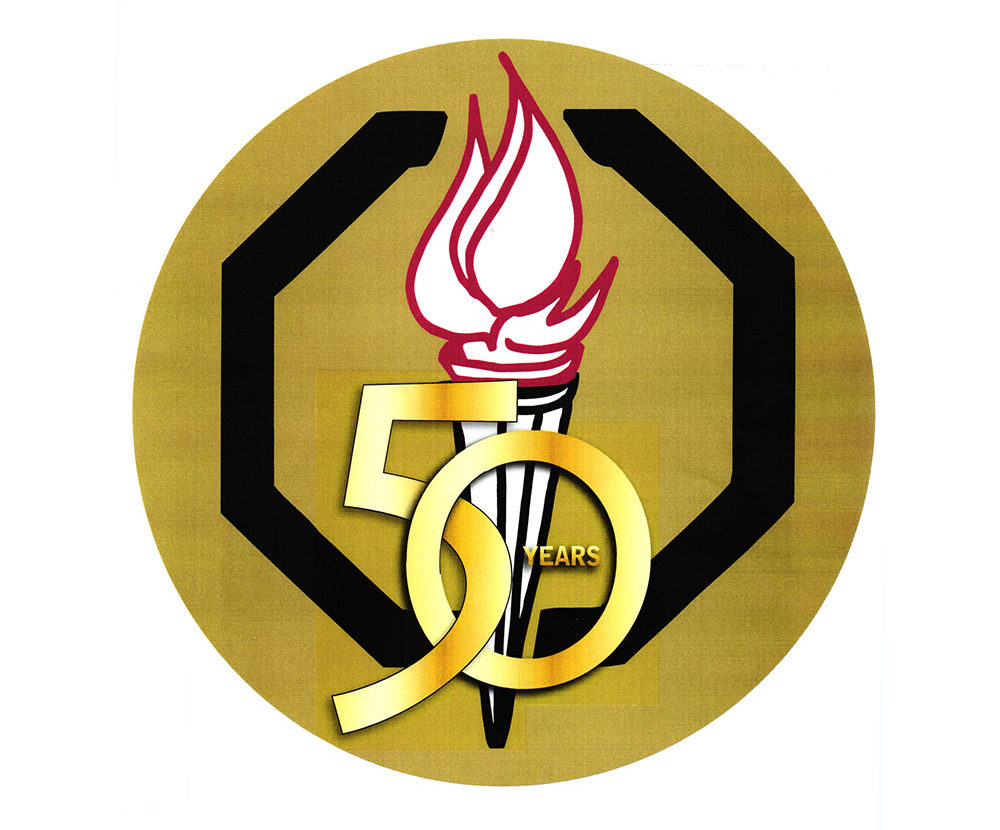 Fifty years! 2022 marks the year Olympic Kilns celebrates fifty years of building gas, electric, and custom-made kilns. We’ve learned a lot from our customers over the years with some of our best designs coming from their wants, wishes for a kiln.

In the early 1970s, Bob Haugen was getting his masters in ceramic engineering at the University of Washington, when a fellow student asked him to help build a kiln for his aunt. The two succeeded in their first kiln and began building more. After graduation, the men decided to open Medallion Kilns and began building and selling kilns in Kirkland, WA. Bob determined the partnership was not going to work and launched Olympic Kilns in 1972 and launched the first 28-inch-wide kiln with 3-inch brick. The 3-inch brick concept would be critical to ensuring larger sized kilns had extra insulation and maintained energy efficiency. Smaller sized kilns were built with the 2 ½-inch brick and reach temperatures of cone 8 (2300° F). The 3-inch brick changed the temperature range to cone 10 (2350° F) and kilns inside dimensions remained the same as lower temperature version.

The business continued to grow, which created another move to a larger facility in Lake Union, WA in 1973. Olympic had a customer interested in a 23-inch-wide kiln but needed it “stretched” for some of the items he was firing. Olympic took the stretched idea and created the first 25-inch oval in 1977. What had been a 10-sided kiln, 23 3/8-inch wide, became an oval 14-sided kiln with an interior width of 25-inches front-to-back and 37- inches long. The popularity of the oval shaped electric kiln would later emerge into two other sizes by stretching the 18-inch wide 8-sided kiln to a 30-inch wide by 20-inch front-to-back oval and stretching the 28-inch wide, 12-sided model to 42-inch wide by 30–inch front-to- back.

The Olympic Oval requires little more room than the cylindrical kiln, yet it provides space for large ceramic pieces and bigger production loads. Olympic Oval kilns are extremely energy efficient constructed of three-inch brick for added insulation and strength. The top section has an additional 2-inch blank row of bricks to protect the first row of elements. The top and bottom sections are connected to the center section by an interconnecting plug, allowing the sections to be easily separated and reducing the amperage carried by the interconnecting plug. Balanced heating elements provide an even distribution of heat within the kiln regardless of the load being fired.

Because Olympic Kilns business was increasing and more space was needed, Bob built a building in Redmond, WA in 1978 to manufacture the kilns there. Redmond proved an excellent location to build the kilns, but Bob began to look at other factors that would make the Olympic brand more competitive and affordable to customers. He decided to take a radical approach in 1982 and move the kiln business to Atlanta, Georgia to be near the source of raw materials, insulating fire brick, to eliminate excess costs both to the company and to its customers.

Rob Haugen, Bob’s oldest son, had grown up in the kiln business and after graduating from the University of Georgia joined the company in 1991. By 1993 Olympic Kilns core line consisted of over 45 different models, 30 models in the pottery and heat-treating category, 5 models in the Large Capacity electric kilns for production and industry, 5 models for glass firing, and 5 updraft gas kiln models. Today Olympic Kilns core line consists of over 246 gas and electric models – 90 models for pottery and heat-treating, 63 electric and gas Large Capacity models, 85 models for glass firing, and 8 updraft gas kiln models. Always known for its innovation and willingness to accept a challenge, today and in the past, Olympic has provided numerous custom electric and gas kilns with some of the custom kilns becoming a part of the standard line.

In 1995, Olympic added the 18-inch and 23-inch-wide Raku gas kilns to its product line. During this time customers began equipping their kilns with electronic controllers, leaving the manual kiln sitter behind. Olympic added five studio front-loading kilns to its line in 1996 which targeted the glass and blade markets.

Once again Olympic required more space and moved the business to its current location in 1998 to Flowery Branch, GA. The new location provided ample space to create the DownDraft 9, a 9 cubic foot gas kiln in 1999, and in 2000, the FL8E, an eight cubic foot electric kiln. The glass fusing business was booming in 2001 for the individual hobbyist and production-oriented businesses. Olympic introduces the 126GFE, 120-volt glass fusing kiln for hobbyists and the GF12E to meet glass artists production needs. Two new hotboxes were introduced to the pottery market, the HB64E and the HB89E.

Olympic launches the electric raku in 2002 providing an electric kiln to do raku like gas raku kilns. The Electric Raku firing chambers are designed to keep heat inside when it is lifted for fast turn-around. These models with their design provide easy access to work on all sides of the kiln. 2003 Olympic Kilns growth continues as does the size of the kilns customers demand. The need for large production kilns is met by offering sixteen varied sizes in front-loading and top-loading styles and in 2004 Olympic began offering electric and gas car kilns.

In 2005 Olympic revolutionizes the glass fusing market with the first square 120-volt model, the Square 146GFE, and the largest 120-volt model, the 18-inch wide 186GFE. Olympic introduces its Freedom Series, a complete kiln package, to the pottery and ceramics market. 2006 makes way for larger square glass fusing kilns with top and clamshell loading capabilities in one kiln. Dual Media models are created for the potter/ceramist who wants to do glass firings in the same kiln that fires their clay ware. Olympic introduces the glass fusing large capacity GF32E Bell kiln with slide out floor and electronic winch lifting chamber in 2007. The Electro Sitter entered the market in 2008 making any brand kiln sitter manual kiln an electronically controlled kiln. The Traveler, a 120-volt portable model on wheels, is introduced for both the glass and ceramic markets and the Annealer is built for the heat-treating glass market. Several products made their way in 2009 including the TopHat models for glass and pottery designed with a firing chamber that lifts for easy access all around the kiln; the Square 186GFE, the largest 120-volt model available for glass fusing; and the Hotsie, a small portable kiln with a glass quartz window for viewing items while they fired.

In 2010 the Medallion Artist Series is launched offering six models built on an economical design for consumer savings. The Crucible 18 is added in 2011 to the glass fusing line and used for melting glass. The 2412FLE in 2013 becomes part of the studio front-loading product line. It features two punty doors and a guillotine lifting door. Olympic created the rectangle glass fusing kiln on a smaller scale than the top-loading large capacity models and added the FL4.5E and FL10E with a shelf rack to the Large Capacity electric kiln line in 2014. The swinging rotating DownDraft gas door was introduced in 2015. It’s designed to keep the kiln operator protected from the hot chamber when the door is opened. Olympic adds a new model to the glass market, the HB86 Vitrigraph.

In 2016 Olympic creates a fresh style in the clamshell glass fusing models – the 146 Slider, 120-volt and the 314 Slider, 240-208-volt. The floor of the kiln slides out for easy access to work and the kiln opens clamshell lifting the entire firing chamber. Olympic brings three small high fire test kilns to market in 2018.

The covid pandemic did not stop Olympic in 2020. We continue to be an essential business and have kept manufacturing throughout. The FL64E and FL64E Car, 64 cubic feet kilns were added to Olympic Kilns Large Capacity electric kiln line.

2022 Olympic celebrates fifty years of building kilns for you. That’s right, it has always been about you, the customer, and what you need and want. Bob, Rob, and the talented team at Olympic Kilns are still going strong building hundreds of gas and electric kiln models.

We celebrate our customers these fifty years and are optimistic about the future, meeting the demand for Olympic Kilns product line and custom-built gas and electric kilns.